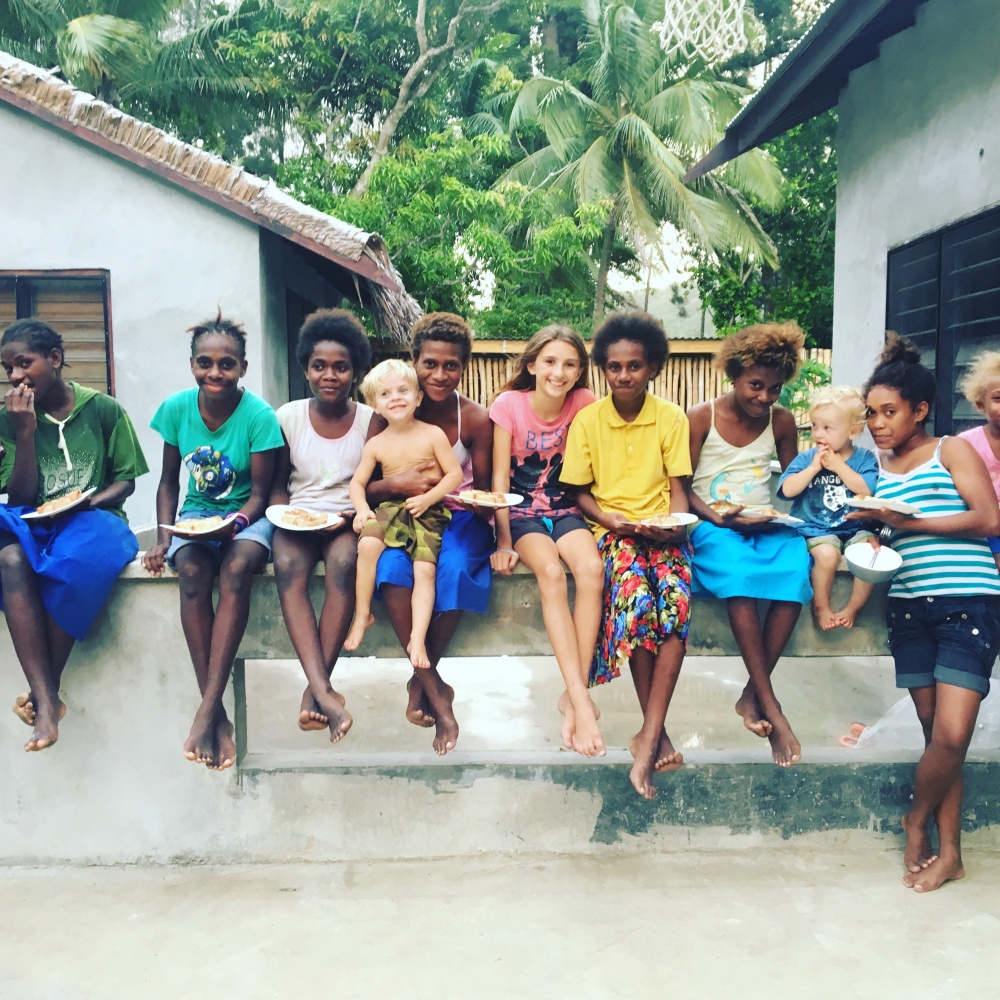 The smell of cinnamon buns was wafting through the house and making everyone hungry. None of the girls that were bouncing around my kitchen had ever had a cinnamon bun before, so we were excited to share them. Early this morning, when my little girls went off to school, they asked me if it was okay if they brought some friends home to play. Being the awesome mom that I am and never wanted to miss a chance to win points with my kids I enthusiastically said “you bet”!

A few hours later piles of kids poured through my front door. This was not a few after school friends! I was pretty sure they had brought the entire school home with them! The girls were giggling as they took off their blue and yellow uniforms and folded them neatly across tables and chairs. It was too hot to keep the uniforms on and most the girls had a change of clothes with them. After quickly stripping their skirts they ran down to the ocean with both my daughters in tow and splashed and swam. The radio had sent out an extra large wave warning, so the girls thought that was the perfect invitation to go and play. 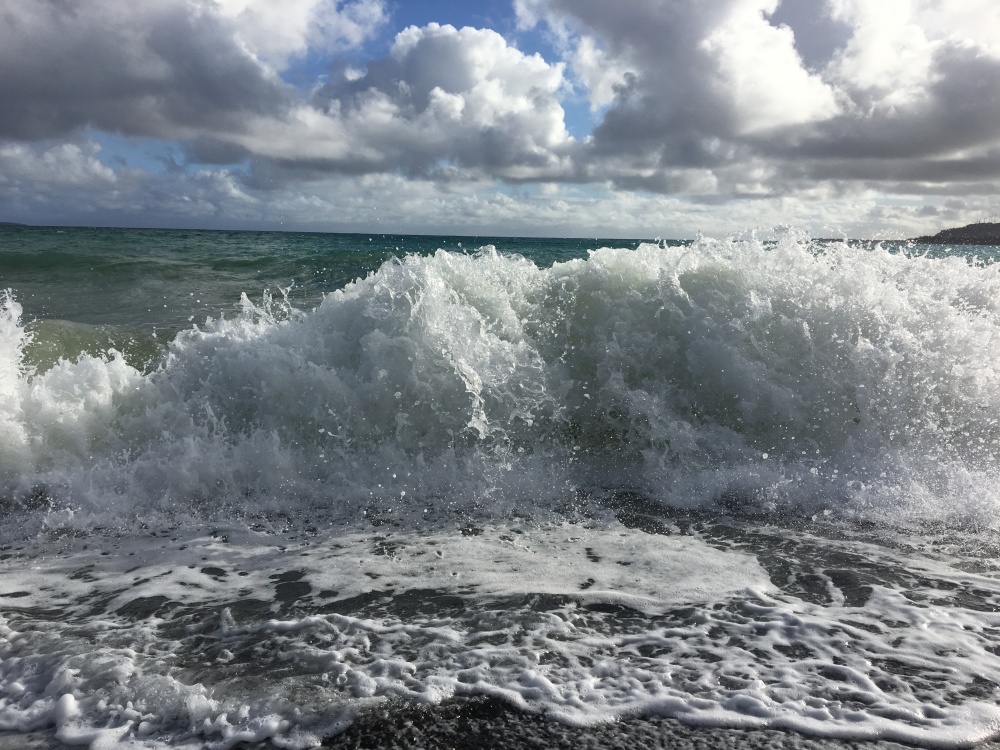 Squealing, and screaming and laughing could be heard over the crash of the giant, frothy waves. I went down to watch them and make sure everyone stayed safe, but who was I kidding? These kids could swim better and further and than I ever would be able to. Swimming was like breathing, and they had been doing it since they were tiny. 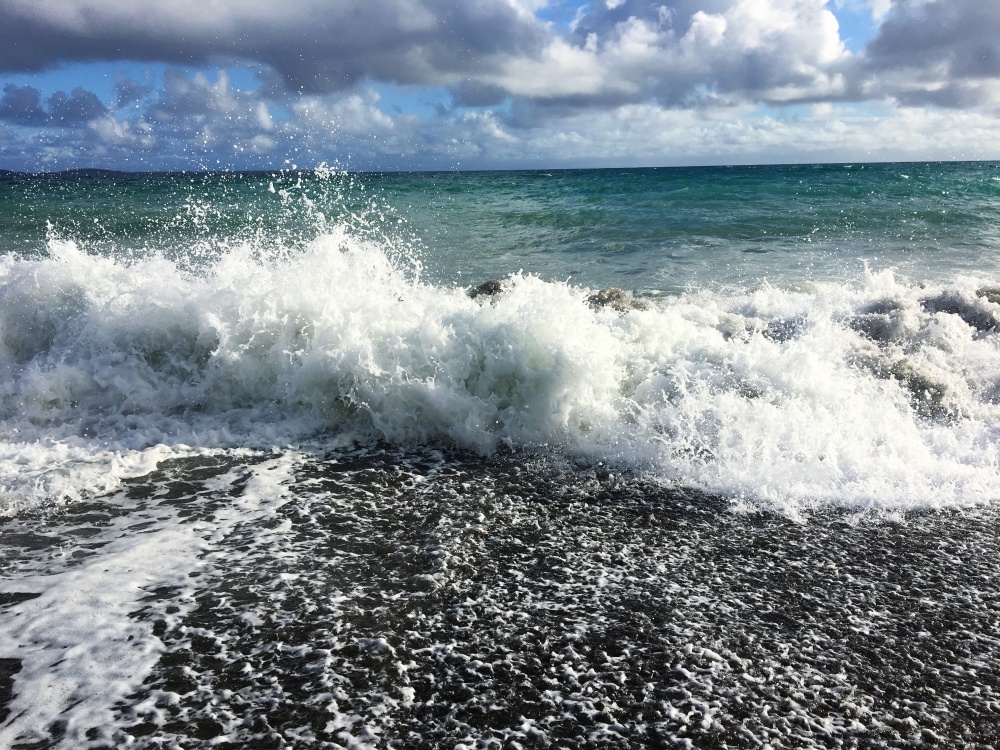 I headed home and a few minutes later, the group of girls came back too. They were all shivering and cold. My girls quickly offered them a hot shower (most of which none had ever had a hot shower before) and sometime before my gas tank had been completely emptied of it’s expensive liquid, the girls all tumbled out. They wrapped themselves up in every dry towel I had and began to play basketball outside. 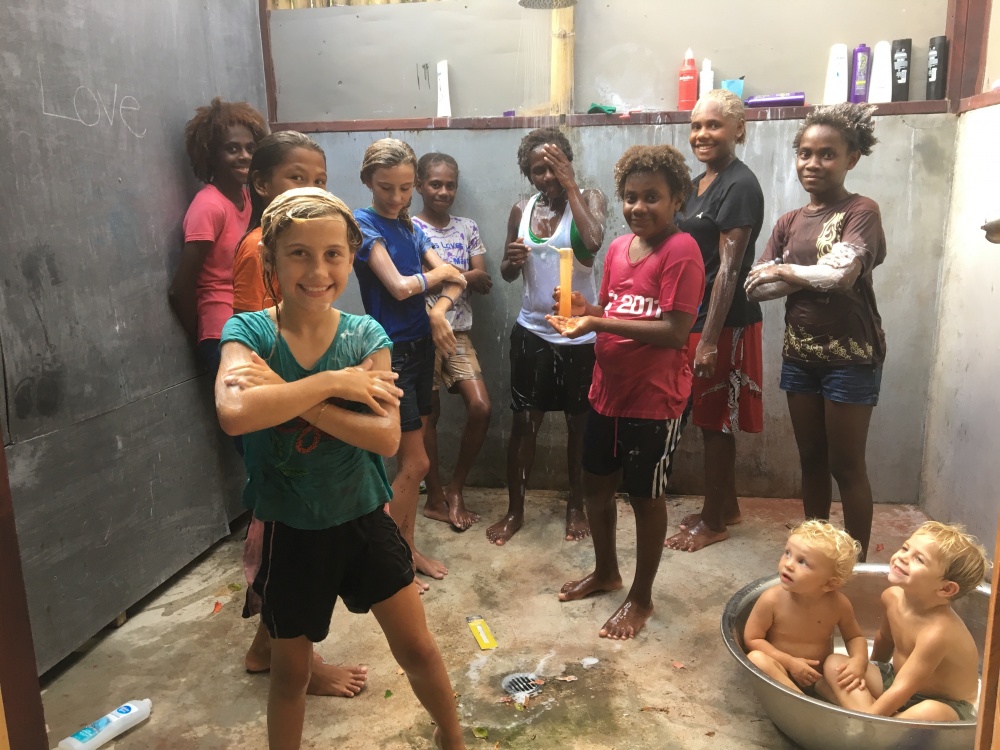 I was fascinated by the large group, and sat staring  out the window at them, not quite sure what to do. I had been expecting a few little girls to come home with mine and had made a little snack of cut up pineapple and watermelon for them to share but that was not going to do it! 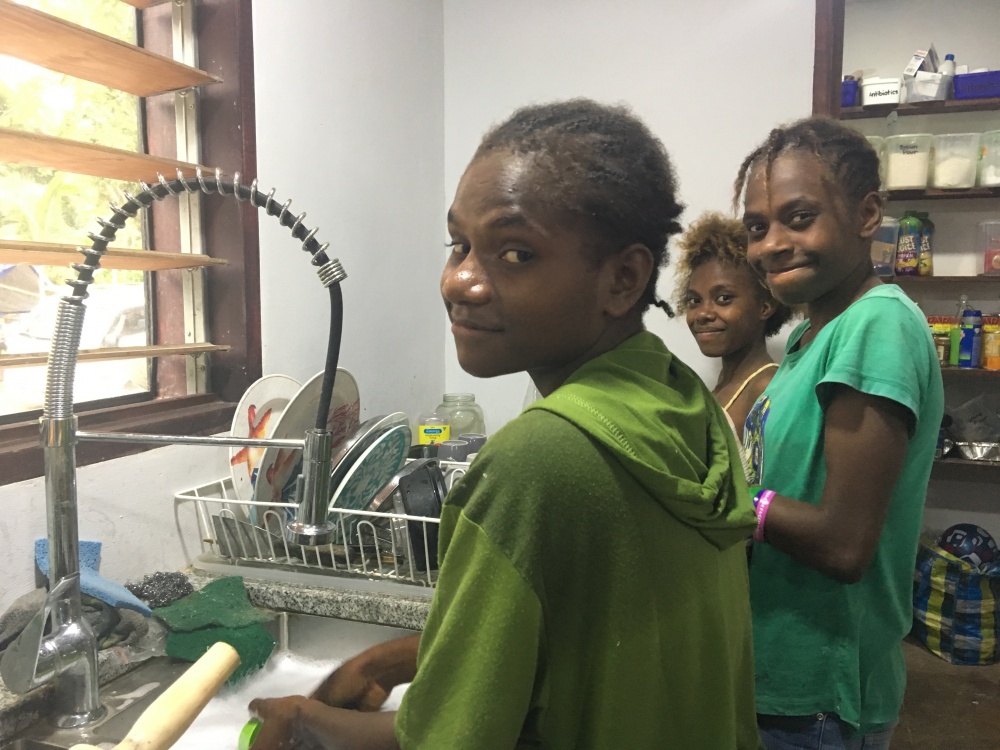 I quickly thought up a plan, I’d do a cooking class. I told them all that today we were going to make cinnamon buns. They were delighted and threw the basketball through the hoop one last time before running inside. I tried to ignore the puddle of water all over the floor and the messy kitchen, telling myself that they wouldn’t notice either- so neither should I. I divided them into groups of 4 and  taught them how to make the tasty, sticky treat. I don’t speak Bislama very well, and they don’t speak English very well, but we did alright as I mimed and acted out exactly what steps happened next.

They stirred, and kneaded and rolled and sprinkled and cut until every pan I had was covered in cinnamon buns waiting to be cooked. Every girl there cooks on a fire in her village. None of them had stoves or ovens, so they were mesmerised by everything in the kitchen. Giggling each time I gave them an instruction or pulled out a new dish. 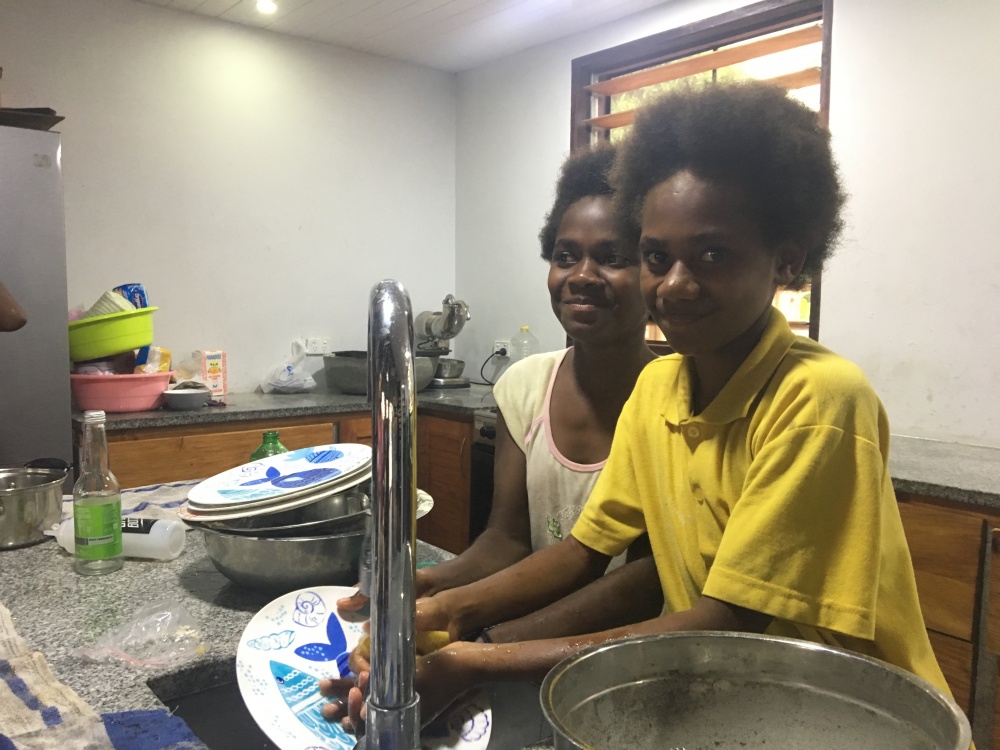 As the cinnamon buns cooked I told the girls it was time to clean up the messy kitchen. It had already been a disaster with dishes piled high in both sinks, before we had started and now it was even worse. Those girls only needed to be told once and they took their job very seriously. The counter was wiped about a hundred times, and each dish was washed, dried and within 20 minutes the kitchen was immaculate.

Little girls with frizzy black hair, and dark brown skin, sparkling white teeth and beautiful smiles were all being dropped off now that it was pitch black and drizzling with rain. I wondered if their parents even knew where they were today, or wondered what took them so long to come home from school, and I wonder what magic will happen in my house tomorrow! 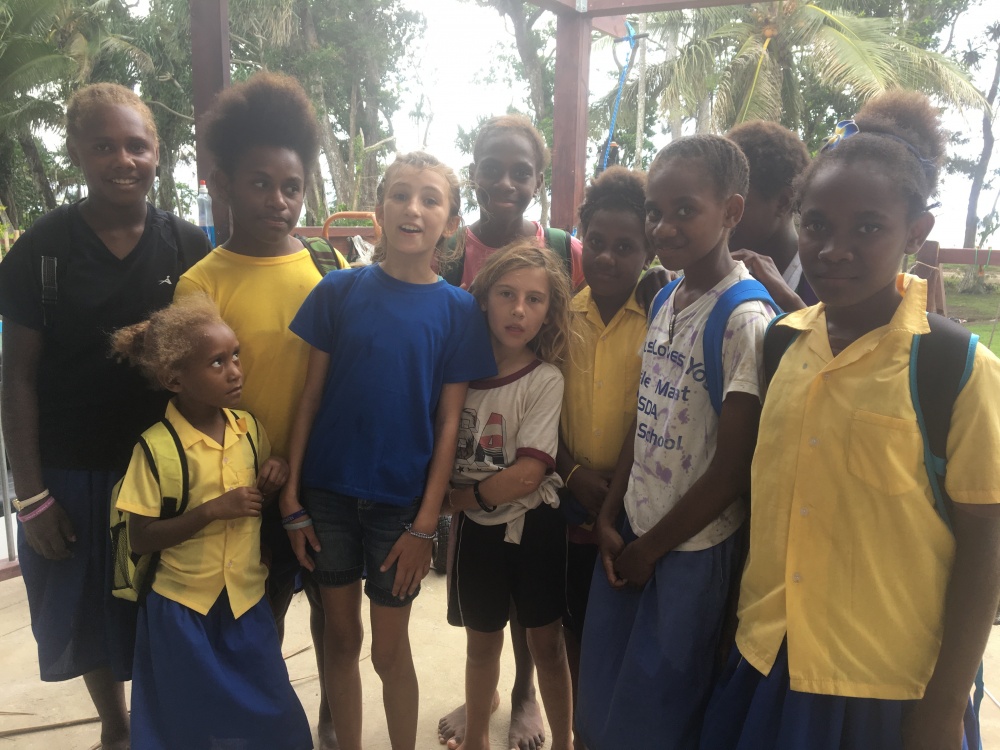