Those are the last words that I heard on Sunday before I left church.

Since coming to Vanuatu we’ve had lots of adventure and fun but not many opportunities for service. “One small service project” certainly sounded easy enough. At least that’s what I told my sisters and sister in laws when I woke them up at 7:00am Friday morning.

we were supposed to be there at 8:00am and I thought we would have plenty of time to find it. We decided at the last minute to invite Judy the house girl to come with us. It’s a good thing we did because without her we never would have found the house hidden deep in the village. As it was we were quite late already when we arrived. There were several very sketchy roads that we weren’t sure we would make it over safely but we did.

The group of 8 Niven women were so surprised to see us. First off we are the only white members of our church on the island besides missionaries and secondly I’m pretty sure they think white people cant work.

They pretty much stood there and most of them stopped working as we came in. They just watched us curiously. The “one small service project” was to weed about 10 feet in front of and on the sides of a house. It looked like the jungle and I wasn’t even certain why we were pulling out all the weeds. But as the minutes passed a lovely tropical garden began to materialize. There really were beautiful tropical plants hidden amongst that jungle.

The way those island women could swing a machete put us white people of shame! We worked together for another hour after we had arrived.

Besides being hot, the work was a little scary for me. I am always afraid that a centipede will bite me, and last I read on the Internet the gardeners and Vanuatu are most likely to get bit by centipedes because they like to hide in the damp dirt that gardeners are working in.

Many of the women had rakes, shovels, and machetes, however us white girls got to pick up their piles and I never knew what was going to be underneath.

I did get attacked by fire ants. They feel like tiny little stings all over your leg, and then red bumps swell up that itch you for sometime. I also uncovered about eight millipedes, however thank goodness None of us ever came across a centipede.

We were all sweating by the time it was done, and quite happy that we had arrived late.

The most beautiful part of the service project was that in this very humble home made of cinderblocks, scrap tin and broken glass windows, somebody cared enough to plant the garden, and what was now an old grandma watched out the window as women from her granddaughters church came together to help her uncover it again. It was a lovely way to spend the morning! 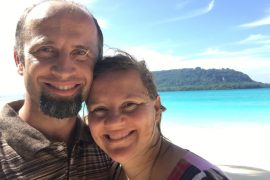 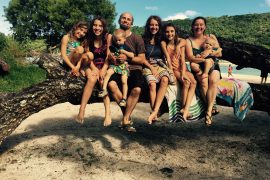